It’s the 20th! That means Shattered Minds is officially out in the US today. My 5th book is out in the world.

If you purchase a copy by the 25th and email the receipt to lauralamauthor [at] gmail [dot] com, you can claim 10k of free tie in fiction. Likewise, if you leave a review of any of my books, you can claim a signed bookplate. More details here.

Shattered Minds was a difficult book to write (though I’m not sure any of them were exactly easy…). It involved a lot of research into things I wasn’t familiar with, and it is very dark, even in comparison to False Hearts. The first draft was simply finding the plot and scoping out the characters, but it was in the second and third drafts it really came alive. Now I’m quite proud of my twisted, dark Frankenstein retelling in near future Los Angeles.

Me speaking about Inspirations & Influences on The Book Smugglers.

Before Our Story Begins on Tor UK, where I introduce the world a bit.

Review on The Illustrated Page: “Forewarning, Shattered Minds is not for the faint of heart. It is pretty gruesome.” I also did an interview on the blog.

I wrote a post about 5 books featuring a futuristic California for tor.com.

A nice review on Barnes & Noble: “Laura Lam pitches a near perfect game with Shattered Minds, a new standalone novel set in the world of last year’s False Hearts. Part futuristic sci-fi thriller, part mystery, and part psychological potboiler, it presents a frightening vision of a biotech future in which advances in science allow the human body to be manipulated without the subject ever being aware it’s happening.”

Kirkus lists it in its June roundup. So does Gizmodo. So does Best Science Fiction Books.  So does Book Den. So does Blastr/SyFy Wire. It’s also a spring highlight for Foyles. Since Shattered Minds is an Amazon.com editor’s pick for SFF, it’s on the Amazon Omnivoracious blog, too.

The Speculative Herald describes my villain as “an unholy blend of Orphan Black’s Cosmina and Rachel” and I’m totally stealing that phrase.

There’s been a UK blog tour of extracts and giveaways: 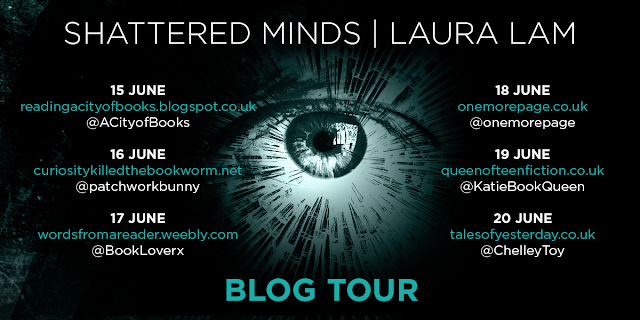 Here’s the cover copy and some purchasing links!

She’ll fight corruption, but can she save others from herself?

Former neuro-scientist Carina craves killing. But to protect others, she self-medicates with Zeal, an addictive drug which allows her to satisfy these urges in dreams. Sudice Inc. damaged her mind when she worked on their secretive brain-mapping project—and this violence is the price she pays.

Carina wants to be left alone to self-destruct, until an ex-colleague passes her dangerous information on Sudice. She finds herself unwillingly drawn into a plot involving illegal experiments on unwilling volunteers, blackmail and assassination.

As Carina races to stop Sudice, she needs the incriminating data Mark locked in her mind. She persuades a band of hackers to decrypt her broken memories. One is a former doctor, Dax, who helps Carina fight her addiction to Zeal. If she can hold on to her humanity, they might have a future together. But all shall be for nothing if they can’t bring their enemy down, never to rise again.

« Books Read in May
Shattered Minds US Blog Tour »